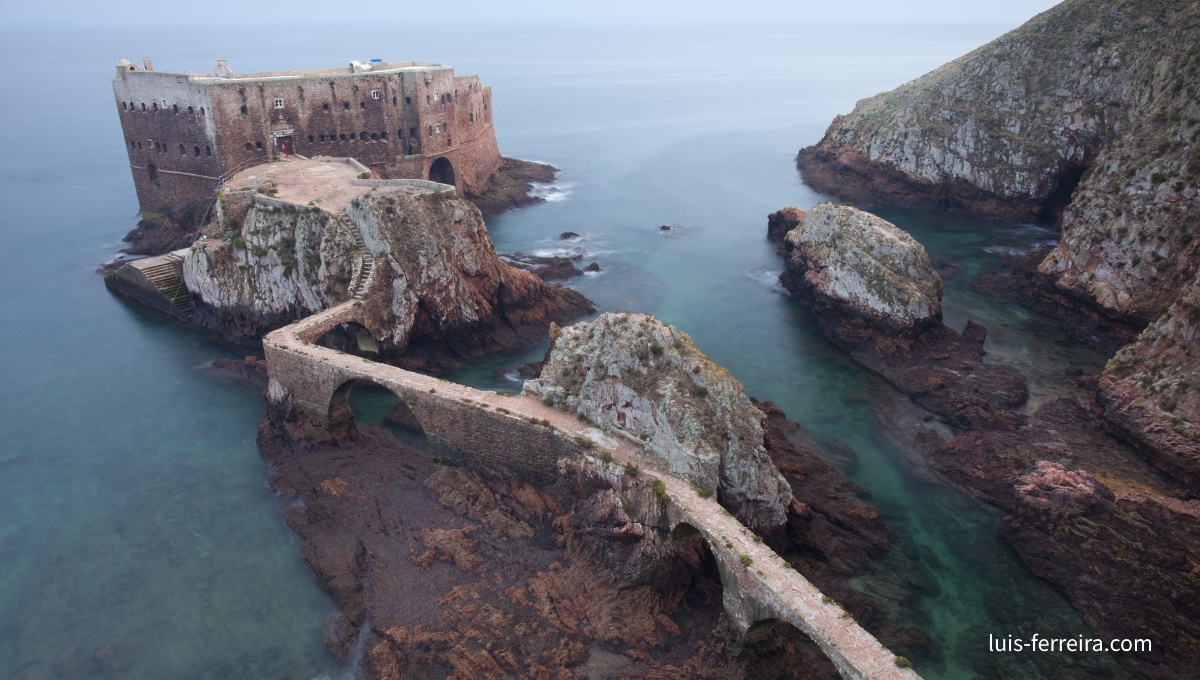 There are several historical marks of Berlengas occupation and use over time...

The monastery was built in the early sixteenth century by order of D Manuel, on the east slope of “Carreiro do Mosteiro” and it was active between 1513 and 1548. It consisted of various accommodations such as a chapel, courtyard, cells, cistern, refectory, dorm room and walled garden.

The St. Jerome monks occupied Berlenga Island around 1514 to spread The Crist word by land and by sea, and to administer the divine sacraments to those who landed on the island. However, the monks left the island in 1545 due to hunger, disease and pirates attacks. There are few traces from the abandoned Monastery. Some building materials, such as limestone, were reused to build the “Castelinho” and São João Baptista Fort.

The date of São João Baptista Fort construction is unclear, given there are references to the existence of a fort since the XVI century or from the first quarter of the XVII century. However, in 1651, D João IV gave order to build or rebuild the fortress, to face the regular presence of corsairs and pirates on Berlenga Island and therefore strengthen the defense of Peniche citadel. The fort was built, reusing limestone masonry and other architectural elements of the old Misericórdia Monestery, on the islets of the Muxinga bay. The fort served important military purposes. The most renowned happened in 1651, when the Castellan fleet made of 14 ships commanded by Don Diogo Ibarra intensively bombed the small Cabo Avelar Pessoa garrison which was guarding the fort. Its crew succumbed without food and gunpowder within 2 days. The fort was also the basis for the British during Napoleonic wars, and for D. Pedro troops for conquering Peniche fortress during the liberal uprising.

The fort was repaired in 1678 and between the late seventeenth century and early eighteenth century, it served as a prison. Following the departure of the last garrison in 1914, the fort was abandoned serving as a refuge for lobster fisherman and others. José Morgado, the fort guard, during the 30s, still proceeded with the ritual of flying the Portuguese flag on Sundays and national holidays. At this time, the fort underwent some works and in the 50´s it was fully recovered and converted into a guesthouse by the General Directorate of National Buildings and Monuments. Today, the fort shelter house is managed by the Friends of Berlenga Association (“Associação Amigos da Berlenga”).

The lighthouse was built at the highest point of the Berlenga Island and consists of a square tower 29 meters high.

Built at the highest point of the Berlenga Island in 1841, the lighthouse consists of a square tower 29 meters high. Previously to its construction, there was a tower to watch and guide sailors, which subsisted until the construction of the current lighthouse, and which was then reutilized by its masonry.

When the lighthouse was built, the fuel used to emit light was oil, spending about 2 500 tones of this precious oil annually. At that time, the lighthouse had already a rotational movement activated by clockwork. However, this system was still poorly developed as it emitted a flash, every 3 minutes, which could be mistaken by any other light coming from land or sea. Over the time, this lighthouse had different lighting mechanisms, including a Fresnel hyper-radiant lens – the largest type of lenses ever built. Until 1975, the service was provided by many lighthouse keepers who lived in the outbuildings with their families. Nowadays, the lighthouse is equipped with photovoltaic cells that allow its energy dependence, with a light beam that can be seen up to 27 miles (50 km) away.

This quarter was built above the ruins of the old Misericórdia Monestery, in the slope of “Carreiro do Mosteiro”. Following the rehabilitation of the São João Baptista Fort in 1941, Berlengas fishermen had no available shelter anymore, using as an alternative the island´s caves. So the Commander Andrade e Silva (another name by which the quarter is known) built this neighborhood to give fishermen a shelter during their campaigns at sea. It was finished in 1943 by the Fisherman House Central Board in collaboration with the Captaincy of Peniche Port, in order to ensure conditions of decent housing to the fishing community that has always been seasonally present in the island. During the second half of the XX century, there as some development towards visit support infrastructures and catering, namely the “Castelinho” and the restaurant. In the 80s, the Peniche Municipal Council sets up a small camping area near the fishermen quarter. Together in this set, there are also the pier structures, access roads, the fishing support structures, the generator, water supply, waste treatment facilities and other tourist facilities such as some changing rooms and camping area. In this area, it was found some archaeological findings dated from the Roman times (late first century BC) and with diverse origins such as North Africa, Bética province, as well as local productions.