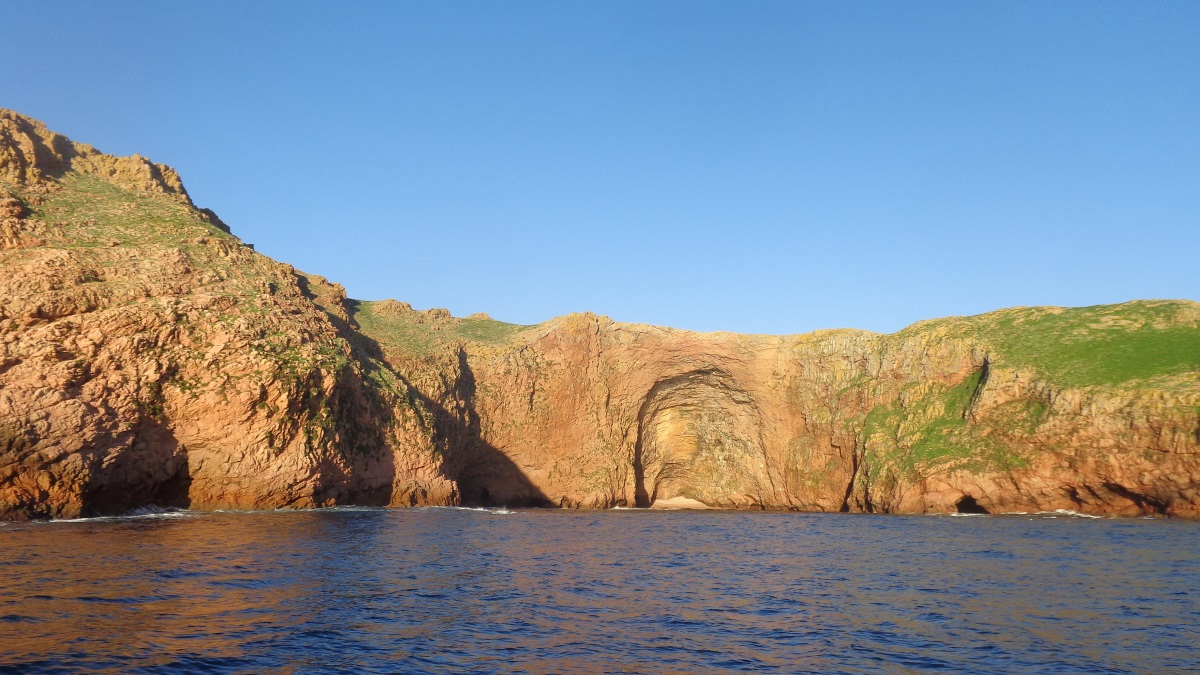 The island of Berlenga is a pink granite plateau with rounded shapes, marked by a jagged coastline, which brings a number of bays, caves, arches, islets and rocks. All these forms of relief are mostly the result of geological processes. Noteworthy is the very engaged and aligned narrow tight coves, such as those of Carreiro dos Cações and Mosteiro, which almost separates the island of Berlenga into two fragments, the Old Island and the Berlenga, which gives it a curious form of eight. Indeed, the development of the two previous coves is conditioned by an inverse fault currently inactive. Its movements produced crushing and fragmentation of the granite massif, which due to the action of erosive agents for thousands or millions of years allowed further breakdown of rocky materials along the fault.Around the Berlenga Island there are other examples of unique natural geological monuments, some of them quite scenic, which are also associated to ancient faults nowadays inactive. These monuments include the Carreiro da Inês, the Furado Pequeno and the Furado Grande. The evolution of erosive stage along these faults is quite different; while in Inês fault the erosion is already very advanced and is responsible for separating the Berlenga Island from the Inês Islet; In the Furado fault the erosion process is at the beginning. By the abrasive action of the waves, the erosion is accentuated at sea level, but in the top of the fault we can still observe bridges and natural arches.

Other interesting geoforms include cavities, caves, arches and natural bridges that have developed on the cliffs of the Berlenga Island, such as Cova do Sono, Cabeça do Elefante, Gruta Azul, Gruta de São João Baptista and the Furado. These structures were mainly originated by wave’s mechanical action on the base of the cliffs, where the granitic rocks were eroded more intensively. However, their degree of disaggregation is conditioned by geological factors that characterize the granitic rocks.

The magma chamber where it was generated the magma that gave rise to the Berlengas granite was settled by fusion of materials inside a crust made up of rocks, possibly similar to those that arise in Farilhões and Forcadas. The cooling in this magma chamber formed two types of minerals: first the heaviest of iron and magnesium nature and later the least dense such as feldspar and quartz. If significant levels of water were present in the magma chamber, it would occur modifications of ironmagnesium minerals (mica) by release of iron ions, which could possibly be captured by the rough surface of feldspars, making them pinkish, the colour of the Berlengas granite. However, the same modification process can happen later, by a chemical reaction and after the minerals solidification. However, one of the situations doesn’t exclude the other.

In the lifted and eroded block which constitutes the Berlengas Horst, wasn’t identified any sign or evidence of its evolution during the Mesozoic times. However, numerous fragments of pink granite and metamorphic rocks were found, similar to those identified in the archipelago in strata of different units from Jurassic that outcrop at Cabo Carvoeiro and Baleal, as well as in the Papoa’s volcanic eruption, suggesting that the size of the block containing the archipelago would have been much larger than the current.

More recently, traces were recognized from its evolution in the last million years, but the timeframe for continuous events is very difficult to rank. The Berlengas rounded shape and relatively flattened surface of its top suggests that we are in the presence of an old marine abrasion platform. This hypothesis is confirmed by the identification of erosive forms, which includes the potholes which developed on the surface top when it was still on the bottom of the sea. Moreover, the absence of typical morphological structures originated from massif granite erosion and the absence of soil on the Berlengas Island surface, suggests that this block was underwater over long periods of time. However, it is unknown when this occurred.

On the other hand, the existence of small cavities and caves in the cliffs above the current sea level, such as Furado Seco, and marine terraces that correspond to residual deposits of ancient beaches, located at similar altitudes, seems to indicate that sea level was already positioned at that horizon. These observations suggest high variations of sea level, possibly as a result of glaciation, as the rates of raising and lowering in tectonic blocks are very low in the region.

A detailed observation of Berlenga Island surface evidences the presence of a drainage system, less developed and not very pronounced. In fact, the watercourses identified next to the lighthouse, are raised some tens of meters above the sea level. So when precipitation occurs, the rainwater flows and falls directly into the sea in cascades. This evidence shows that the rate of massif granite erosion is lower than the speed variation of the medium sea level.